Butterflies, Birds, and One New Owl

Several of us have been keeping an eye out for butterflies over the last few weeks now that they’ve started flying again.   The last one I saw was a West Coast Lady back on November 23, but recently we’ve been seeing a few of those and catching glimpses of Mourning Cloaks and Clouded Sulphurs.   Following up on Rebecca’s tip that she’d seen Sandia Hairstreaks as early as March 5 last year, on that day this year I looked around a bit in Domingo Baca and (yes!) saw a hairstreak after searching quite a few clumps of beargrass along the trail.

This one originally was on the beargrass, but immediately flew to the juniper where the picture was taken and wouldn’t let me approach very closely.   It seems this early in the year, most of the butterflies are quite energetic and difficult to approach, which I don’t remember from last year when it was possible in many circumstances to easily get close enough for a picture.  Nearby was a Clouded Sulphur that hung around long enough for an okay picture. 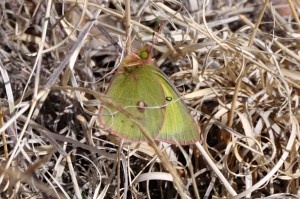 Further up the canyon where a creek flows between the narrow canyon walls were an unusually large number of Mourning Cloaks, this one looking quite fresh.

Despite this weekend’s cold, cloudy, and even a bit snowy, weather, the coming week should be warm and sunny and hopefully a few more butterflies will be out and about.

Last weekend, several of us drove down to Bosque del Apache NWR to help Rebecca scout out her planned Thursday Birder trip (which unfortunately ended up being cancelled due to the weather).  On the way, we took the back road from Socorro to check out the birds at Jerry Oldenettel’s house, scoring one more owl for this spring, this time his resident Barn Owl.

(Rumor has it that in addition to the one mentioned in my last posting there may also be a second Western Screech-Owl at the Rio Grande Nature Center , but so far I haven’t seen the new one.)

Along the way, I was also fortunate to get this picture of a Vesper Sparrow when it surprisingly flew closer to me as I was sneaking up on it to take a picture. 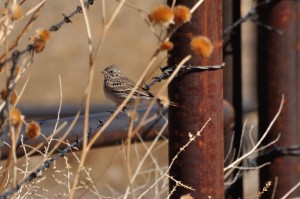 Just before reaching the Visitor Center, we noticed a Common Raven dining on top of a telephone pole. The group had a variety of opinions on what was for dinner that day; something white and fluffy with feathers, apparently. 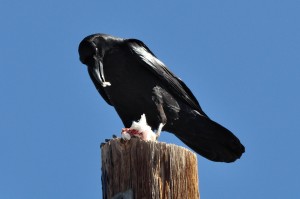 At the Visitor Center, we got several good looks at a Pyrrhuloxia including this one in a flock of White-crowned Sparrows feeding on a quail block outside the center’s viewing window.

Because of time constraints, we didn’t spend much time on the refuge itself, but were fortunate in seeing three Dunlinat the first pond on the Marsh Loop (a rather unusual sighting for this area) and a single Greater White-fronted Goose in a flock of Canada Geese a little farther along the drive.

The weather the next day was pretty good, and I spent a little time wandering around Embudito Canyon (searching again for that hairstreak I’d finally see the next day).  Not many butterflies about, but a quite vocal Cactus Wren was singing from the top of a cholla,

and a female Ladder-backed Woodpecker busy pecking away at other cholla bushes.

Later in the week at the Alameda Open Space, a Bushtit would pose for me, which is a little unusual since they usually are in a tightly-knit pack quickly moving from bush to bush.

In the river there, a pair of female Common Mergansers were putting on a pretty good display, the point of which wasn’t obvious to me but certainly fun to watch. 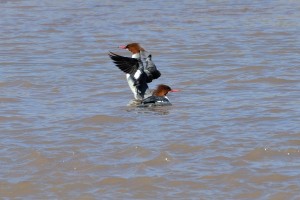 And in a pond at the Rio Grande Nature Center, a pair of male Ring-necked Ducks posed nicely for their picture. 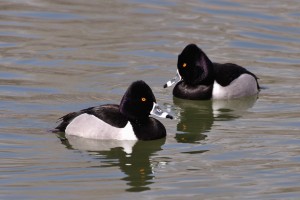 1 Response to Butterflies, Birds, and One New Owl