Although a little slow at times typical for this time of year, it has been another good week for birding around here.  On Monday, I met up with several friends at the Tingley Ponds who hadn’t yet seen the Rusty Blackbirds and Pacific Wren that have drawn so many people lately.  Not the best day for birding with a pretty stiff breeze blowing and threats of a little rain, but fun to watch a Red-tailed Hawk just hovering in the wind as we met in the parking area. 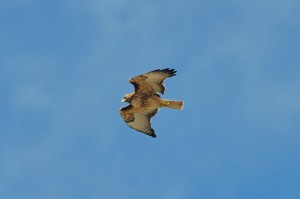 With all the wind, the wrens were tucked away somewhere and we weren’t successful in finding them that day, but the blackbirds seem to have become accustomed to people and allowed a much closer approach than they did several weeks earlier.

Wednesday on my way to the Alameda Open Space, I detoured down San Antonio Drive following directions from Judy Liddell, and was thrilled to see a Peregrine Falcon hiding out at the top of the tall telephone structures in the median across from the Post Office where I’d parked. 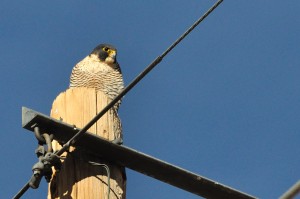 Maybe the second time I’ve ever seen one, this one allowed me to get reasonably close before it would sail off to the west before again landing on a more distant structure.  After getting a few more pictures, it was off to Alameda.  The Black-crowned Night Heron roost on the west side of the river just north of the bridge had at least six roosting birds including several immatures, quite a few more than I’d ever seen there before.  While watching them from the pedestrian bridge, one at a time four of them decided to fly off back across the river and let me grab a few pictures as they went.

Walking south along the eastern side of the river, there were several Common Mergansers, the usual Mallards, Coots  and Canada Geese, and a few Wood Ducks floating in the river.  In one of the trees lining the bank was this porcupine, of which there seem to be quite a few around this year.

Usually, they hang out quite a bit higher in the trees, but this one was close enough you can even make out the facial expression.

This week took the Audubon Thursday Birder group to Los Poblanos Open Space, where we ended up with close to 20 species including quite a few Savannah Sparrows hiding in the weeds.  At the end of the walk as we were compiling the checklist, an American Kestrel landed on a nearby telephone wire for several of us to photograph.  I managed to get this picture as he flew from the wire to a tree a little further away. 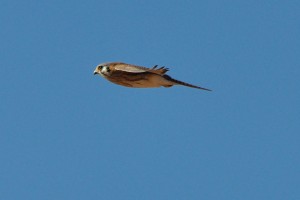 Not quite done birding for the day, Rebecca and I decided to drive over to the Sandia View Academy in Corrales to try for a better look at the Western Screech-Owl we know is there but has never shown itself very openly.  Once again, when we got there you could just make out its ear tufts as it nestled deep in its hole in a large cottonwood.  This time, however, when I played the call, the owl popped right up and glared at us for disturbing it before dozing off while still quite visible.  If you look closely at the lower right, you’ll see it’s holding a mouse or some other prey. 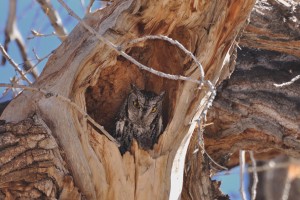 A life bird for me, and one I’d been wanting to see since getting to see the Eastern Screech-Owl on a visit to the Texas Hill Country last spring.

On Friday, Rebecca suggested going to check out a cattle tank east of San Antonio, New Mexico that has been reliable in the past for Horned Larks and Chestnut-collared Longspurs.  (The location is known on ebird as the ‘Longspur Tank’.)  It was unexpectedly breezy and we saw surprisingly few birds anywhere that day, but sat patiently by that tank for about an hour and did see large flocks of the Horned Larks and briefly at least two of the Longspurs.  Never managed to get a picture of the latter, but took a number of pictures of the former. 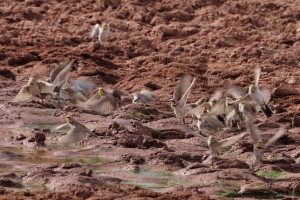 Interestingly, ebird reports from recent years indicate that sometimes the longspurs greatly outnumber the larks, while in my admittedly limited experience usually the longspur/lark ratio is more like what we saw.

Heading back, we decided to drive the BLM’s Quebradas Backcountry Byway, an unpaved 24-mile drive between US 380 and Escondido Lake through some very scenic country and a landscape dotted with quite a few ocotillo.  We only saw a single bird, an American Kestrel, on the drive, but it does look like it could turn up some interesting birds in fairly unique habitat that close to Albuquerque, so a return trip in the spring is definitely in order.

On the way home, we stopped at Whitfield Wildlife Conservation Area and walked the loop.  Not expecting to see many birds, there were still a few about and it was a pleasant afternoon for a walk.  There was a fairly large flock of Savannah Sparrows and a few Song and White-crowned Sparrows.  A Song Sparrow posed nicely long enough for a picture. 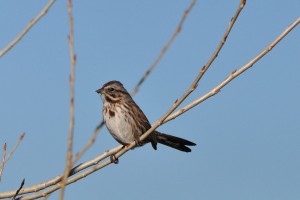 One of the reasons for seeing few birds might have been the resident female Northern Harrier that was patrolling about.

For the dead of winter, it was a good week, especially with getting such good looks at that rather uncommon Peregrine Falcon and Western Screech-Owl.

1 Response to Some Surprising New Birds