Albuquerque got a good dose of winter over the last couple of weeks, starting with that incredibly high wind event that seemed to blow all the way across the country from Los Angeles and followed by a pretty fair dusting of snow and remarkably cold temperatures.  Until the sun came out again, I hunkered down in the house without getting out to take any pictures.  The day before it all got started, weather at the  Open Space at the end of Copper was close to perfect for a scouting trip for the next day’s Thursday Birder trip there.  Highlight of the day was spotting a cactus wren on the east side of the U-mound hill – I’ve been seeing them regularly in Embudito, but this was a first for me in this area.

By the time of the next morning’s outing, however, the wind had reached ridiculous levels with all the smarter birds well tucked away, so we all decided instead to bird the inside of a nearby Starbuck’s for a while (no birds, but the coffee and conversation were good) before heading off to an excellent Christmas potluck at the home of one of the members of the group.

Having survived my bout of cabin fever, the sun finally reappeared on Tuesday and I got out in the afternoon to check out the Rio Grande Nature Center and Montano Open Space.  Most of the water at the Nature Center was frozen, but there were a few wood ducks, coots, and several others in what open water remained.  Montano was better, with a pheasant and northern harrier seen among the growing number of sandhill cranes.  When the weather got even warmer on Wednesday, I decided to stop by Tingley Ponds and then take another look at Montano Open Space.  At Tingley, the northern pond was completely iced over, but a small stretch of open water remained on the southern pond that held quite a few coots, American wigeon, Northern shovelers, and redheads, all paddling frantically to keep the water open.  Here’s a picture of a male northern shoveler who hopped up onto the ice to take a break, and of a male redhead just cruising along.

Montano Open Space was again pretty entertaining, with a large number of sandhill cranes and some  Canada geese browsing in the fields.  It was a little surprising when all the geese took off simultaneously in alarm when this little American kestrel left his perch and sailed over the flock.

The cranes ignored the event, and you wouldn’t think the large geese would have much to fear either.  A few of the cranes, however, did comment on the uproar.

Particularly entertaining that day was the same juvenile Northern Harrier hanging out in the southeast corner of the field where I’d seen it the day before. 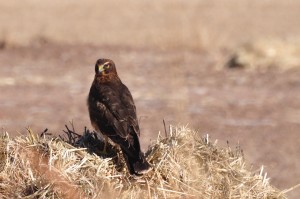 Apparently hungry, this guy was actively hunting whatever moved in the area including the kestrel shown above, and in a moment of major excitement,  attacked a large flock of rock doves that were pecking along the ground, which it would continue to harass unsuccessfully for several minutes.

Northern Harrier on the Attack

The next afternoon, a smaller than normal Thursday Birder group headed down to Whitfield Wildlife Conservation Area in anticipation of watching the sunset fly-in by the sandhill cranes.  Because of that week’s cold, however, the pond there was frozen over and while there were a few cranes about, most flew on in search of a more secure roosting spot.  We did see a number of good birds around, including a resident northern harrier and American kestrel, a pyrrhuloxia (!), a large flock of Savannah Sparrows, 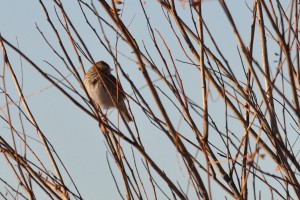 the usual White-crowned Sparrows, an unusual number of Western Meadowlarks, plenty of red-winged and Brewer’s blackbirds, and a couple of Spotted Towhees among others.

Toward the end of the walk, with the sun setting and a blanket of cold settling down, we spotted what we first thought was just a kestrel flying away, but only had a chance to realize it was some sort of shorebird nobody had a chance to identify before it disappeared in the distance.  Pretty cold by then and nearly dark, we decided to call it a (good) day.

Birding, butterflies, nature photography, and travel blog from right here in Albuquerque New Mexico.
View all posts by joeschelling →
This entry was posted in Birding. Bookmark the permalink.

1 Response to A Chill Wind Blows