Birds of a Feather

The old saying ‘Birds of a feather flock together’ gained new meaning this week after a few observations at the Bernardo Wildlife Area and Bosque del Apache NWR.  Trying to track down the proper attribution for that saying makes an interesting google search, but it does indeed seem that birds with crane feathers do. 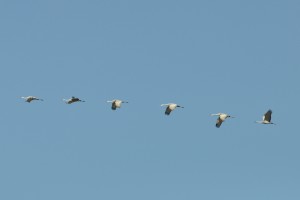 In other crane news, it seems there is actually a limited hunting season for Sandhill Cranes.   I’ve been told ‘crane nuggets’ are particularly tasty, but would think all those bills and legs would tend to pile up after a while.

Crane nuggets? What's up with that?

This flocking phenomenon also occurs with geese, as shown by these Snow and Ross’s Geese at the Bosque.

An amazing display just as we drove up, these thousands of geese had been spooked by a hawk or something and all took to the air en masse for a few minutes before settling back down.  We stayed and watched them for at least an hour, cameras at the ready this time, but didn’t get to see that incredible phenomenon again.

Another bird that seems to enjoy hanging out with others of its kind is the American Goldfinch, a few of which were busy working the Maximilian sunflowers at the Bosque Visitor Center. 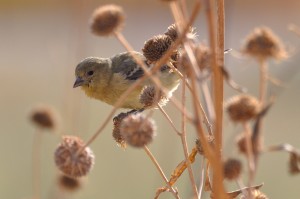 A group of four American White Pelicans was seen from the boardwalk trail, two of which put on a bit of a formation flying show as we approached.

Can’t say as I’ve ever seen Northern Harriers flocking together, but all day at the Bosque they seemed to be patrolling around looking for food, and it makes one wonder if those geese would feel at all threatened by a smaller bird.

Harriers are known to terrorize Coots, however.

Of course, that particular Coot might just be paranoid since all the other ones seemed oblivious to attack from above.

Staying late in the afternoon to await the daily ‘fly-in’ along with a surprisingly large number of other people despite the chill air, I got this picture of the tranquil scene [everybody else must’ve been behind me 🙂 ].

Shortly after that, but getting too dark for more photography, that huge flock of Snow Geese from earlier in the day had moved from the pond to feed in the open fields, but now all returned in one massive swirling group punctuated by the dramatic arrival of much smaller groups of the much larger and more graceful Sandhill Cranes.  Only a small number of cranes were present last Friday, but their numbers should increase considerably over the next few weeks, sometimes reaching as high as 15,000 by early December.  With the Festival of the Cranes in full swing this week, we’re planning to head back there this weekend for the festivities, and with more promising weather and a way early start  hope to catch the even more impressive ‘fly-out’ that takes place just about dawn.

Hard to top some of those sights, but the rest of the week provided good looks at a few other birds.  At the Rio Grande Nature Center, this Bewick’s Wren posed quite nicely after chattering up a storm and bustling around the bushes. 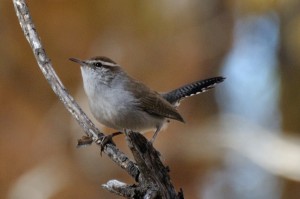 That got me thinking I needed to go back to Embudito, where we’d seen a surprising number of Rock Wrens near an area of a  recent wildfire.  Our group that time was a bit too large to approach close enough for a good picture, but this time the wrens were a little more cooperative. 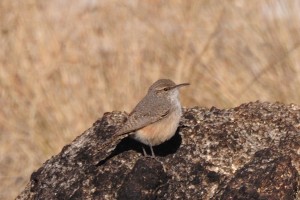 And not to be left out was a Curve-billed Thrasher, a bird that always seems to enjoy posing for a picture.