Posted on September 4, 2011 by joeschelling

This week started early Monday morning with the hunt for the Gray Vireo in the Four Hills Open Space, a nondescript little gray bird that is not that common in Albuquerque, and which we finally found after working on it for several hours.  No pictures of that elusive bird, but it was entertaining to watch a Broad-tailed Hummingbird chase this Cooper’s Hawk that had been patrolling the area in search of a meal. 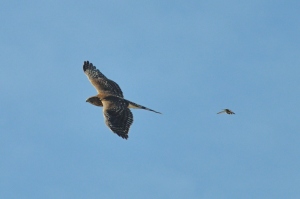 Later in the week, I took a couple of trips a little farther away from Albuquerque than usual that yielded several new and interesting sightings.  With the Thursday Birder group, it was off to the Circle A Ranch near Cuba, NM, a bit more than an hour to the northwest along a route that passes by some incredibly scenic geologic features and badlands – another trip that way to focus on the geology and petrified wood in the area is definitely on my list for the future.  Right off the bat on the way to the Circle A Ranch our first bird was a Lewis’s Woodpecker, which I’ve only seen once before almost 20 years ago.

Not the greatest picture, but it was pretty far away and my long lens is in the shop for the next few weeks.

Arriving at the ranch and wandering the grounds before setting off on one of the trails, we spotted a number of  birds including several Acorn Woodpeckers busy hiding acorns for the winter.

In addition to a good sampling of birds on our walk, we spotted a couple of horned lizards and, in a large meadow filled with wildflowers, an amazing diversity of butterflies.

Having only seen horned lizards in the Sandias about a month ago and only once before in almost 30 years, it was a treat to see two of them along the trail at Circle A.  Among the butterflies was a Colorado Hairstreak, which we’d seen right at the entrance to the ranch tucked in a juniper and then again sunning along the trail with its wings spread open.

The next day, Rebecca and I set off on a butterfly hunt to southwest New Mexico, stopping at Percha Dam, several spots in the mountains on the way to Silver City (including a fabulous butterfly spot at Rio Mimbres), down to Deming, and then back home via Truth or Consequences and Bosque del Apache.  Along with several other species we’d seen earlier in the year, there were about six new species to add to the list.  Since I’m so new at this butterfly business, pretty much anything we see is a ‘lifer’ for me, which makes it pretty entertaining.  We’d been seeing Arizona Sisters fairly regularly for the last month or so, but on this trip found a very cooperative one near Cherry Creek Campground.

Another one, the Western Pygmy-Blue, is a tiny little butterfly that we’d started seeing recently, and found again at Percha Dam State Park, Rockhound State Park, and at Bosque del Apache (where we also were surprised to see a Vermilion Flycatcher on a rather slow afternoon for birding).

Among the new ones on the trip were the Painted Crescent, Elada Checkerspot, Palmer’s Metalmark, Four-spotted Skipperling, Dainty Sulphur, and Golden-headed Scallopwing. 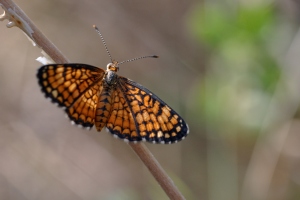 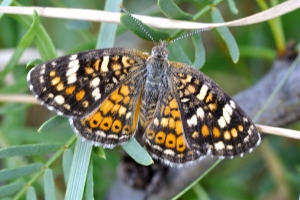 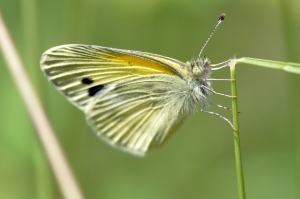 Some of the other butterfly pictures from the trip are posted on my website at http://sandianet.com/butterfly.

On the trip we also saw two new lizards, one I think may be a New Mexico Crevice Spiny Lizard, 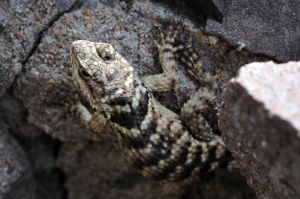 and at Rockhound State Park outside of Deming, this most amazingly colorful Greater Earless Lizard.