It’s been almost exactly a month since my last post due to my being gone for nearly 3 weeks on a fabulous trip to the State of Mato Grosso in Brazil, and busy for the last week culling through the more than 1800 pictures that ended up coming home with me.   During the trip, I first spent a couple of days in Cuiaba waiting for the rest of the group to arrive, after which we departed for the Pantanal, a huge wetland area that is seasonally flooded.

While a couple of us had a few days to spend before the trip started in earnest, the large Maes Bonifacio park in Cuiaba gave a couple of us an introduction to what was to come , with jacamars, trogons, ibis, and quite a few other birds, and trees in some areas where the marmosets were as abundant as squirrels back home.

This next picture is the Rufous-tailed Jacamar that we’d see again several times, but never this close and in such good light.

After about 5 days in the Pantanal, we flew to Alta Floresta for almost a week at Cristalino Lodge in Amazonian forest, and then wrapped up the trip with a few days in a completely different habitat up on the mesas at Chapada dos Guimaraes near Cuiaba.

Hyacinth macaws were one of the special birds in the Pantanal, and we got to see them both in the wild and a small group that nested near one of the lodges we stayed in.  The large numbers of caiman (is ‘caimen’ the plural of ‘caiman’?) about were quite surprising, but seemed to spend most of their time dozing.

I really liked the way this picture of a Great Egret turned out,

and got a several good pictures of some goofy Chestnut-eared Aricaris that stopped by one morning.

In addition to the birds (and caiman), we also got to spend some time with 3 kinds of monkeys, lots of different toads in the Pantanal, and plenty of capybara.  There was one sighting of a crab-eating fox one night, tracks of an ocelet or other big cat, several otters, and more. 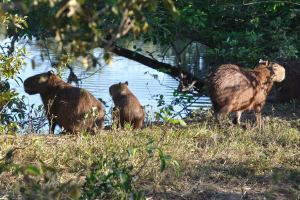 In Cristalino, things got kicked up a notch, not just with more otters, iguanas, caiman, and a great variety of birds including several more macaw species, but the butterflies were just extraordinary.  How we ever spotted this clearwing is a mystery, its cellophane-like wings camouflaged against the jungle floor.

Several species of ‘eighty-eights’ were also flitting about, bright red-orange on the upper wings hidden when they rested.

With nowhere near enough time in a week to fully explore the Cristalino area, it was time to move on to the Chapada, our third type of environment.  Hot and dry, the Chapada is a series of large mesas that rise above the otherwise flat terrain, and hosted a number of different birds.  Our lodging at Pousada do Parque was the most enjoyable of all the places we stayed, with great food and comfortable accommodations.  A highlight for me was a morning spent photographing hummingbirds feeding on a red penstemon-like bush that was lit just perfectly.

2 Responses to Back from Brazil