Young Birds (and some butterflies)

In my last post, I mentioned going to Tijeras Ranger Station a couple of times last week as one of the only places not closed due to the ongoing fire restrictions.  No change this week, and we went back again on Monday in an unsuccessful search to see that Leda Ministreak again.  I did get another pretty nice picture of a Marine Blue that morning, however.

The next morning I went back to the Botanic Garden to visit the PNM Hummingbird Pavilion again and to walk around the park since it’s just about the only other place that’s open these days.   No new species at the Pavilion since my last visit, but I took a lot of pictures of that Atala Hairstreak, hoping for better pictures than those from back in June.  A couple of them came out pretty well. 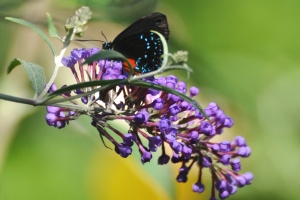 The Garden is holding a Dragonfly Festival this weekend, so I spent some time walking around the large pond looking for a few, but didn’t see very many at all and maybe need to try at a different time of day.  It was fun to observe this immature Black-crowned Night Heron standing on the shore that allowed me to get fairly close for a picture.

On Thursday, the weekly Audubon Thursday Birder group headed up to Villanueva State Park, which fortunately gets a little more rain and was open to the public with a few restrictions on open fires.    We saw a pretty good variety of birds during the day including what we think was a Savannah Sparrow on the drive up, quite a few Yellow-breasted Chats, Blue and Black-headed Grosbeaks, three species of swallows and a couple of woodpeckers, a Townsend’s Solitaire, and a number of others.  Near the end of the day, we got good looks at a pair of Hepatic Tanagers, but despite taking a number of pictures of the male, this is about the best I got. 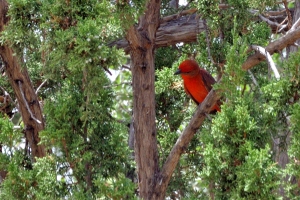 A much better picture, however, with good lighting and being able to get a little closer, is this one of a nesting Western Wood-Pewee. 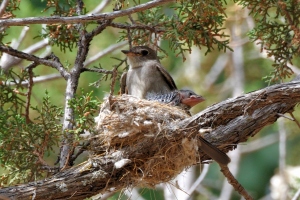 We were a little surprised we didn’t see more butterflies around that morning, but toward the end of the day did spot a number of little Reakirt’s Blue butterflies and this Juniper Hairstreak. 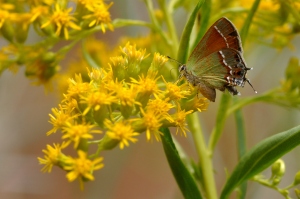 Hairstreaks are very tolerant of people and are slow to fly away, so I’ve decided I like them.

Birding, butterflies, nature photography, and travel blog from right here in Albuquerque New Mexico.
View all posts by joeschelling →
This entry was posted in Birding, Butterfly. Bookmark the permalink.

1 Response to Young Birds (and some butterflies)