Return from the Nature Retreat

Visited my friend, Terri, in way southern Illinois the first week of June on a wonderful vacation.  Terri manages the War Bluff Wildlife Sanctuary there for the Illinois Audubon Society, and it is just a remarkably biologically diverse 500 acres of woodland, meadows, and ponds. In addition to a good variety of birds, lots of butterflies and dragonflies, several species of frogs, snakes and other amphibians, and plenty of interesting insects, the sanctuary has quite a few mammals, including deer, groundhog, beaver, squirrels, and rabbits.  Following are a few of my pictures from the trip; there’s plenty more on my Illinois webpages.

Her puppy, Jade, accompanied me on most of our daily forays into the woods,

and was just a treat, pointing out things as we went along, such as snakes, turtles, feathers, and skulls, and clearly enjoying herself – The cats, Opal and Topaz, were cool, too, but Jade’s my favorite – I’m gonna miss that dog!

On one of her regular surveys of the trails, Terri was taking notes on the numerous bluebird houses on the property and showed me this nest of little Eastern Bluebirds.

One day, we found an abandoned baby bird, probably a Mourning Dove, in the yard 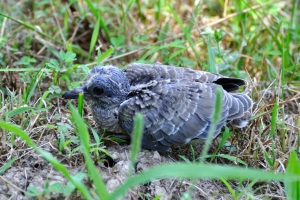 and while looking nearby for its nest, which we never did find, spotted the nest of a Yellow-billed Cuckoo, which Terri figured out from the eggs and type of nest construction. 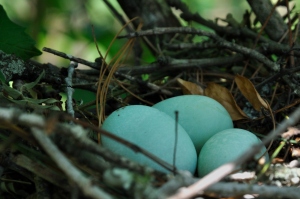 The next day, I did get a couple of pictures of the mother (I presume) sitting on the nest (and posted some on that website above).  Among the other youth in the forest was the fawn of this White-tailed Deer, which was a rather special moment.

Spent quite a bit of my time snapping pictures of all the butterflies and dragonflies both at the sanctuary and on several trips we took to other nearby locations, including a fun day at the annual Cache River Nature Fest (The Nature Center there is at the center of a major research effort on Prothonotary Warblers, which seem fairly common in the area).  Here’s one of the  pictures of a Great Spangled Fritillary posed on a flower in the middle of a huge field of Pale Purple Coneflowers.

While ‘Dragonfly Pond’ did indeed have lots of dragonflies buzzing about, it was on one of our other outings that we saw an Ebony Jewelwing, the only black-winged damselfly, and a new one for Terri, who’s lived here for the last 8 years.

I’d seen them somewhere before (Virginia, maybe?), but didn’t realize how unique they were until I looked them up in the book.

Every evening, there was a concert conducted by cricket frogs, bullfrogs, and maybe a few others, with a lightshow provided by lightning bugs.  Didn’t miss not hearing airplanes, vehicles, and all the urban noises for those few days – truly a wonderful retreat into nature.  All that place needs is a few parrots and howler monkeys, and it’d be like being in the neotropics again.